Internal variability in surface temperature and the hiatus

Our paper Quantifying the likelihood of a continued hiatus in global warming is published today in Nature Climate Change. Here is the New Scientist take, the Carbon Brief take, and the Met Office Research News article.

Chris Roberts took on a huge task, processing massive amounts of data in the CMIP5 climate model archive, and leading the analysis on what I think is a taut paper.

We look at how long internal variability might contribute to a temporary hiatus or slowdown in global surface warming. How long could cooling due to internal variability counteract the sort of warming caused by human influences that we have seen over the last few decades? In part, it is motivated by our paper from last year [Palmer & McNeall 2014], looking at the consequences of energy sloshing around naturally in the Earth system.

This kind of question has been looked at before [e.g. Santer et al. 2009, Knight et al. 2009, Meehl et al. 2013, Maher et al. 2014].  We’ve taken things further by using a large multi-model collection of simulations, using some nifty stats, looking at conditional probabilities of hiatus continuation, splitting out internal heat rearrangement from top-of-atmosphere changes, looking at the probability of accelerated warming, and checking the surface patterns of warming vs cooling decades.

From my perspective the headline results are that 1) you would expect natural variability to counteract 20 years of warming in only about 1% of the model simulations but that 2) If you’ve already seen a 15 years of a cooling contribution, then the chances that it will continue for another 5 years are surprisingly high (best estimate is 1 in 6, but could be up to 1 in 4). 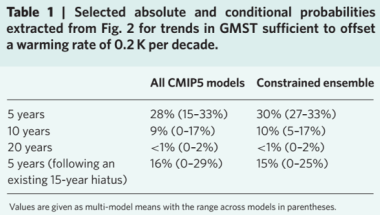 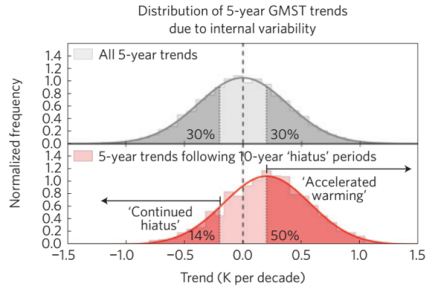 All of this is slightly tricky to interpret in terms of the recent slowdown in global surface warming. It is strongly suspected that other factors (solar cycle, volcanoes, see e.g. Huber & Knutti 2014) have played a part in the slowdown, although the exact relative proportion due to external forcing and internal variability is disputed [you remember the fuss over Marotzke & Forster 2015, right?].

In this paper, we are only studying the statistics of a hypothetical and simulated slowdown, not the slowdown that we are in now. Further, if internal variability has been a large contributor to the real system,  it’s unclear which particular “type” or “mode” of variability is chiefly responsible, and whether all the models are able to simulate that well.

Nevertheless, I think in a situation where there is an active debate as to the causes, extent, and even existence of a warming slowdown, we offer some useful multimodel-derived and quantitative context on how much and for how long internal variability could contribute.

One of the bits of the paper that I’m most chuffed with is buried in the supplementary material. We convinced ourselves pretty early on that adding natural variability from a control run to early 21st Century simulations of a transient run was not a completely crazy thing to do.

An issue here is that any non-linearities in the climate system might invalidate your stats. For example, variability in a system without summer sea ice (which might feasibly happen later in this century) could be fundamentally different from a system where it is present. This would mean that you couldn’t just add the variability from the control run and look at the statistics of no-or-negative warming.

One reviewer spotted this, and, rightly, asked for more evidence than we had presented in the original draft. We did a considerable amount of new analysis (Rank histograms! Statistical tests!), and eventually convinced everyone that the assumption of linearity was valid for our analysis.

Thanks to Matt Palmer and Chris Roberts for comments on an earlier version of this post.

Leave a Reply to 2 new papers on the ‘pause’ | Climate Etc. Cancel reply

← Small victories
Could we run a twitter poster session? →